Opened its doors in 2010 and has since consolidated itself as a reference for innovation and revolution in the Brazilian food scene.  In its eight years of existence, the restaurant has received Best Restaurant awards from several important publications.  In 2015 Oro received one Michelin Star.  The restaurant has most recently won in three different categories at  the Veja Rio Comer & Beber 2016 Awards: Chef of The Year, Best Contemporary Restaurant, Best Sommelier.

“We strive to be in the vanguard.  ORO is in constant evolution.” 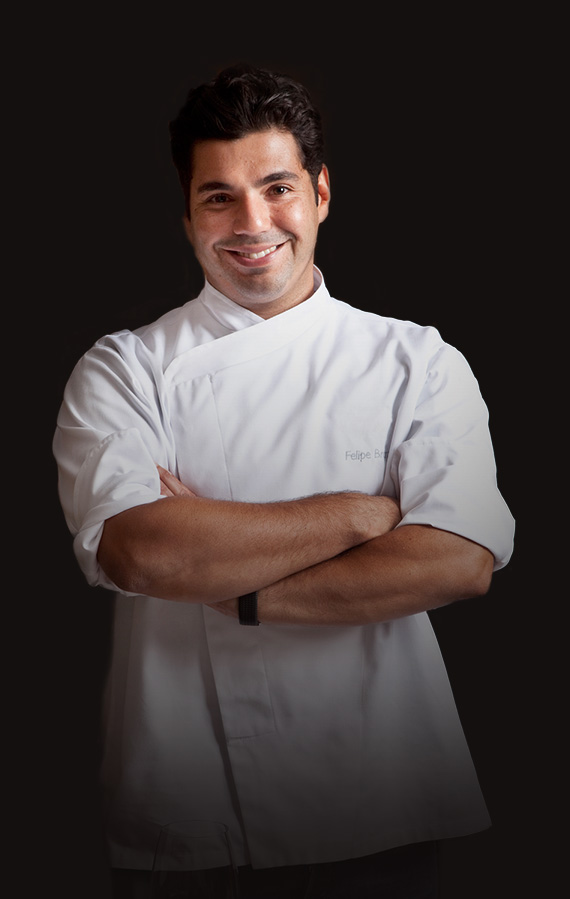 The Chef is the author of  “Felipe Bronze — Brazilian Vanguard Cuisine”, (winner of Best Book Written by a Latin American Chef, and included in the top 5 in the world at the 2013 World Gourmand Cookbook Awards), published by Editora Sextante in 2012, with photography by world renowned Sergio Coimbra.  Felipe is also host of television programs “O Mago da Cozinha” (Fantástico, TV GLOBO), “Que Seja Doce” and “The Taste” (GNT channel)

Cecilia Aldaz was born in Mendoza, Argentina.  She is a sommelier and has  a degree in Oenology from the University of Mendoza.  She was awarded with the title of Best Sommelier issued by Revista Veja for two consecutive years (2013 and 2014).  A restless researcher of the universe of wines, Cecilia is currently enrolled in the Master of Wine program, regarded in the industry as one of the highest standards of professional knowledge.

Rodrigo Guimarães has been at ORO since its inception.  In 2012, he became the restaurant’s Chef de Cuisine.  Rodrigo has a masters in Vanguard Cuisine from the Basque Culinary Center in San Sebastián, Spain.